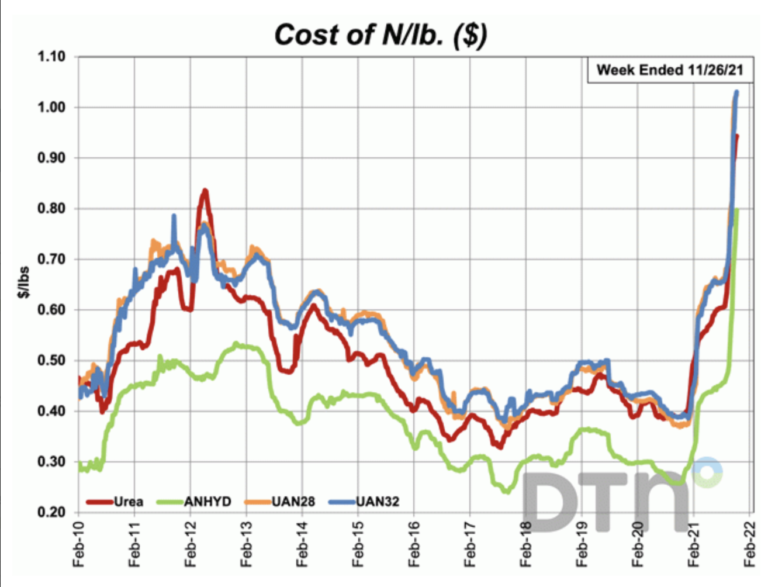 “Seven of the eight major fertilizers recorded considerable moves higher compared to last month. DTN designates a significant move as anything 5% or more.

Fertilizer prices have been climbing since early October.

And in an update earlier this month from CoBank, “Fertilizer Inflation Likely to Persist into Spring Planting,” Kenneth Scott Zuckerberg stated that, “Recent talk suggests that U.S. farmers will plant more soybeans and less corn in 2022 due to rising fertilizer prices. While technically true compared to 2021 (i.e., that soybean acres will rise nominally and corn acres will fall nominally relative to each crop’s actual planted acres in 2021), we do NOT see a crop mix scenario of higher soybean acres over corn in absolute terms for a few reasons.

“We expect U.S. ethanol producers’ demand for corn to remain strong amidst current high fuel prices and record blending margins, and we expect a slowdown in soybean sales to China. USDA’s November 5 acreage baseline update aligns with this, forecasting 92.0 million corn acres versus 87.5 million soybean acres for the 2022-23 crop year. Although corn acreage is forecast to drop 1.3 million acres, this is primarily due to increased acres for wheat and cotton, both of which are currently at or near record-high price levels.

“Given the above, the current price ratio of soybeans to corn, admittedly a simple tool, shows that soybean prices are currently quite weak relative to corn. At present, soybean prices are only 214% of corn prices, compared to a long-term average of 253% .  According to USDA, higher price ratios indicate that soybeans are relatively more profitable than corn, while lower ratios indicate the opposite and thus support greater planting of corn.”

The CoBank report added that, “Over the next six months, CoBank believes there is a high probability that fertilizer prices will remain elevated against a backdrop of record general inflation, above- average natural gas prices, tight global nitrogen supplies and continued strong farmer demand.

“Further, we do not forecast that soybean acres will exceed corn acres due to high nitrogen-based fertilizer prices, although that will likely change in the longer term as biofuel production leans more towards soybeans (for use in renewable diesel) versus corn (used in ethanol).

“Finally, in contrast to the 2008 to 2010 period, farm supply cooperatives appear more focused on managing the risk of write- downs of fertilizer inventories should a rapid drop in prices occur.”